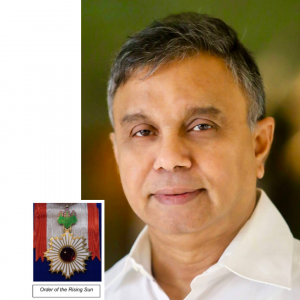 29 April 2022, DHAKA: The secretariat of the Climate Vulnerable Forum (CVF) has welcomed the announcement by the Honorable Prime Minister of Japan Mr. Fumio Kishida to award the prestigious Order of the Rising Sun, Gold and Silver Star national honour of Japan to the Special Envoy of the CVF presidency of Bangladesh Md. Abul Kalam Azad.

The honor, to be bestowed at a ceremonial presentation graced by His Majesty the Emperor of Japan on 10 May 2022 at the Imperial Palace in Japan, recognizes Abul Kalam Azad’s lifetime contributions to public service which has included his role supporting the global leadership on climate issues of the CVF Chair and Honorable Prime Minister of Bangladesh, Her Excellency Sheikh Hasina, in his capacities as Bangladesh CVF presidency Special Envoy since 2020, in addition to his contributions towards Japan-Bangladesh friendship.

Abul Kalam Azad has also held roles as President of Bangladesh Scouts, as Bangladesh’s Power Secretary, as Secretary of the Economic Relations Division (ERD) of the Ministry of Finance, and as Principal Secretary and later, Principal SDG Coordinator of the Prime Minister’s Office. Azad is also currently serving as Commissioner to the Global Commission on BiodiverCities of the World Economic Forum.