The Climate Vulnerable Forum (CVF) is an international partnership of countries highly vulnerable to a warming planet. The Forum serves as a South-South cooperation platform for participating governments to act together to deal with global climate change.

The CVF first met near Male’, Maldives in November 2009 gathering Heads of State, Ministers and other government leaders representing countries threatened by climate change from around the world. It has since been active in building cooperation, knowledge and awareness on climate change issues. At the CVF High-Level Meeting held during the UNFCCC Climate Change Conference in Paris (COP21), the Manila-Paris Declaration and the 2016-2018 Roadmap of the CVF, adopted at this meeting, spell out the CVF’s planned efforts during this time period. The Marrakech Communique and CVF Vision adopted at the subsequent 2016 Forum meeting at UNFCCC COP22 committed Forum members to ambitious climate action, striving, among others, to achieve maximal resilience and to meet 100% domestic renewable energy production as rapidly as possible

The CVF is the international forum for countries most threatened by climate change. Composed of 48 members from Africa, Asia, the Caribbean, Latin America and the Pacific, it represents some 1.2 billion people worldwide. It was founded in November 2009 by the Maldives at Male’, together with 10 other countries. The Forum is led by a rotating chair for an ordinary period of two years, with Bangladesh currently chairing for the second time for the period 2020-2022.

OUR PURPOSE OUTLINED IN THE
CONTEXT OF CVF INCLUDE 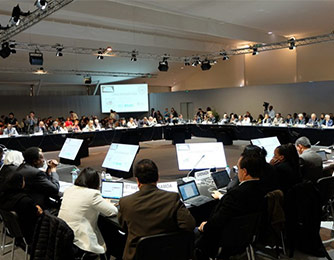 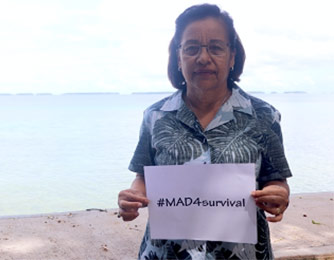 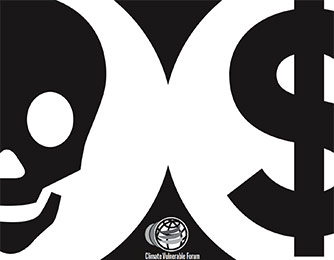 Commission studies, research and data to guide and inform the response to climate change 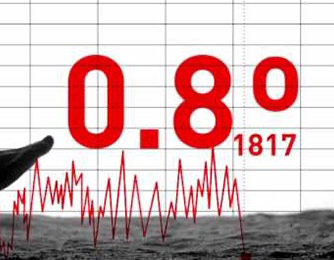 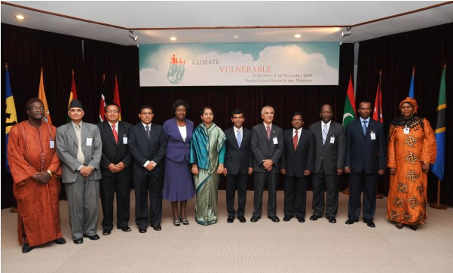 The Forum first met near Male’, Maldives in November 2009 just ahead of the major Copenhagen Summit UN climate change conference (COP15) , where 11 nations gathered adopting a first Declaration that expressed alarm at the pace of change witnessed to the Earth as a result of human-induced changes to the climate.

The Forum’s 2nd Chair, Kiribati, hosted the Tarawa Climate Change Conference in November 2010 leading a number of CVF member countries to adopt the Ambo Declaration together with other governments ahead of the UN Climate Conference at Cancún, Mexico (COP16). It was in conjunction with the Cancún conference that the Forum issued its first Climate Vulnerability Monitor report, entitled, “The State of the Climate Crisis”, drawing attention to the body of specialist evidence attesting to the dire socio-economic consequences of contemporary climatic change. 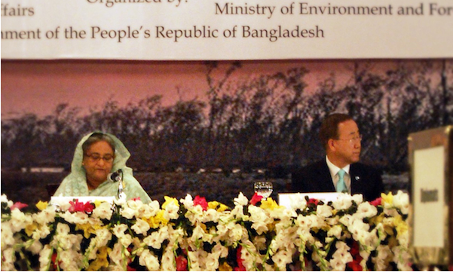 The Forum’s 3rd Chair, Bangladesh, hosted a major gathering of the Forum at Dhaka, Bangladesh in November 2011, adopting a second 14-point Declaration of the CVF in an event inaugurated with the participation of UN Secretary-General, Ban Ki-moon. Another major Forum event alongside the opening phases of the 67th UN General Assembly in New York, US in September 2012 saw the launch of the Forum’s first Trust Fund and the 2nd edition of the Climate Vulnerability Monitor, entitled, “A Guide to the Cold Calculus of a Hot Planet”. 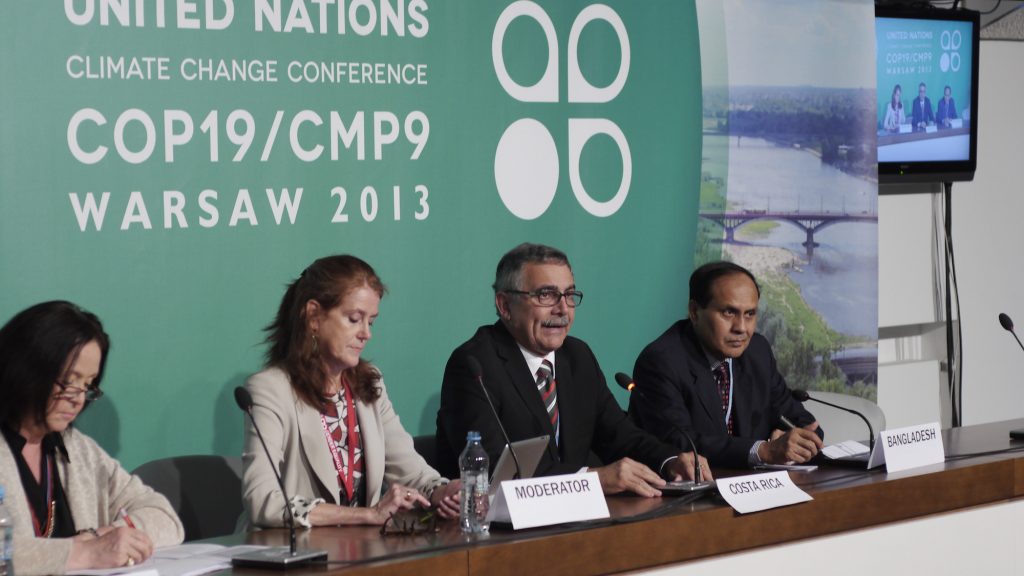 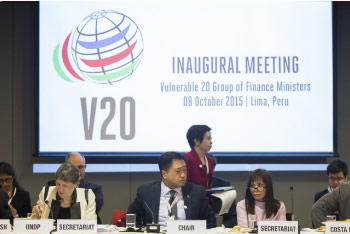 Philippines assumed the chair of the Forum in January 2015 following the tenure of Costa Rica. Under their presidency, the V20 group was officially founded in October 2015 in Lima, Peru. The Philippines also hosted the 2015 Forum Meeting at the UN Climate Conference at Paris, France in November 2015, where the CVF Manila-Paris Declaration and the 2016-2018 Roadmap were adopted. In the lead-up to that, the #1o5c campaign was launched. It is also under the Philippines’ presidency that the ILO Labor report entitled “Climate Change and Labour: Impacts of Heat in the Workplace” was published. At the end of their tenure, the campaign “1.5ºC: A Record We Must Not Break” was launched in the context of the Olympic Games of Rio. 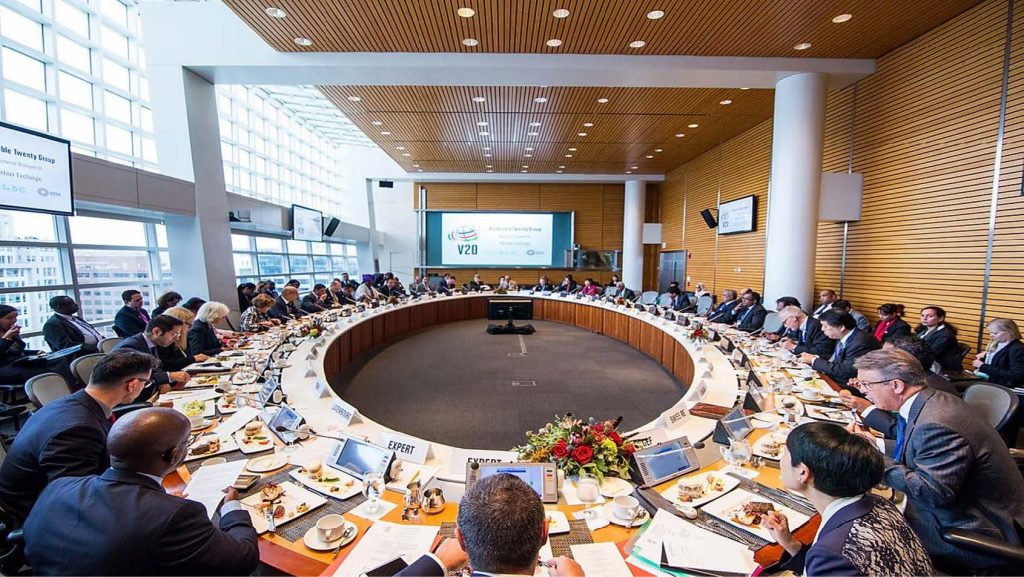 Ethiopia assumed the Presidency of the Forum in August 2016 following the tenure of Philippines. Ethiopia was confirmed as incoming chair of the Forum in the Manila-Paris Declaration of the CVF adopted in November 2015 at the High Level Climate Vulnerable Forum Meeting at COP21. Ethiopia chaired the CVF High Level Meeting at Marrakech, Morocco, on 18 November 2016. Under the presidency of Ethiopia, the Low Carbon Monitor, “Pursuing the 1.5ºC limit: Benefits and Opportunities”, was published.

The Marshall Islands assumed the seventh presidency of the Climate Vulnerable Forum on 28 August 2018 following the conclusion of the presidency tenure of Ethiopia during 2016-2018. The Marshall Islands was nominated as Chair designate by the membership at the CVF High Level Meeting at Marrakech, Morocco, on 18 November 2016. The Marshall Islands convenes the first entirely online Heads of Government level intergovernmental meeting, the 2018 CVF Virtual Summit, on 22 November 2018 and launched the Madrid Ambition Drive for Survival, or #MAD4survival in December 2019, to galvanize support for the importance of all countries to enhance their commitments to climate action in 2020, standing in solidarity with those most vulnerable. It is also under the Marshallese presidency that the GCA became the CVF & V20 Managing Partner and Secretariat host.

Bangladesh assumed the presidency of the Forum for the second time in April 2020, taking over from the Marshall Islands amidst the global covid-19 pandemic. The presidency of Bangladesh appointed the first five CVF thematic ambassadors in September 2020, and launched the initiative “Midnight Survival Deadline for the Climate” (#MidnightClimateSurvival) to call all nations to deliver on their commitments under the Paris Agreement with revised and enhanced NDCs submitted by midnight on 31 December 2020.