Read the full statement from the CVF (English, pdf 0.1mb) 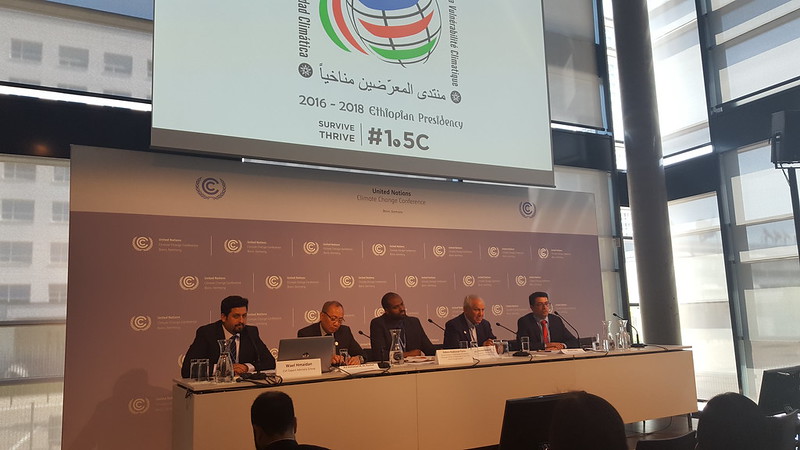 Bonn – 17 May 2017: The Climate Vulnerable Forum released a statement today welcoming progress made by countries in Bonn to advance work on the Paris Agreement on behalf of the more than one billion most vulnerable people it represents. Issued one day ahead of the conclusion of the UN Climate Change Conference at Bonn, the statement highlighted the emergence of far-reaching support for action to keep on track with the goals of the Paris Agreement, notably the 1.5 degrees target.

“Keeping to the 1.5 degrees goal is quite simply a matter of survival. For all of us, the Paris Agreement is our lifeline,” said Mr. Debasu Bayleyegn Eyasu, Director General with the Ministry of Environment, Forest and Climate Change of the Federal Democratic Republic of Ethiopia, current Chair of the Forum, “The world is moving ahead.”

“As our countries and others prepare for enhanced ambition in the run-up to and following 2018, we will be promoting an unprecedented new global drive for accelerated climate action that we are certain would overwhelm any isolated effort to undermine the Paris Agreement.”

“2018 needs to trigger enhanced ambition from all countries if the Paris Agreement’s goals are to remain achievable,” a statement released by the Forum said.

“Costa Rica produces 100% renewable energy most of the year. But we won’t stop there: we are tackling now the transport sector and hope to even export renewable power more widely in the region,” said Mr. William Calvo, Adjunct Chief Negotiator under the UNFCCC, Ministry of Foreign Affairs and Worship, Republic of Costa Rica.

The Climate Vulnerable Forum also called for rapid dispersal of the Green Climate Fund’s current capital to meet the urgency of climate action in support of particularly vulnerable developing countries.

This year’s COP23 was highlighted as a special event for the vulnerable countries with both the incoming and outgoing presidencies of Fiji and Morocco as members of the Forum.
“We express the full support of the Forum behind Fiji and Morocco for continued progress and the best possible outcome to the negotiations this year.” said the statement from the Forum.

The Climate Vulnerable Forum (CVF) is a collaborative platform for vulnerable countries to address the foremost issues related to climate change. It brings together government leaders from 48 developing countries vulnerable to climate change in an open, inclusive and semi-formal cooperation and action framework.