Simon Stiell: The International Community Must Together Steer A New Course of Climate Action

Simon Stiell: The International Community Must Together Steer A New Course of Climate Action 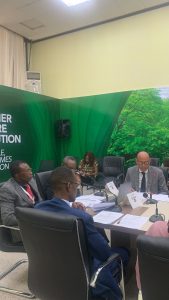 UN Climate Change News, 4 October 2022 – Addressing participants at today’s High-level meeting of the Climate Vulnerable Forum (CVF) of vulnerable nations – organized by the Ministry of Foreign Affairs of Ghana and the CVF on the margins of Pre-Cop – UN Climate Change Executive Secretary, Simon Stiell, said: “Climate change and its disastrous effects have become our constant companion, our constant threat, and our constant worry. Our very survival has never been so threatened. It’s time to turn things around.”

It’s a pleasure to join you at this first “Forum of Vulnerable Nations” — those nations most threatened by our shared climate emergency.

I’m from a small island state myself — Grenada — a member nation.

Like you, I’ve seen how climate change wreaks havoc on the lives of our family, friends and neighbours.

We’ve all — at one time or another — been described as being on the front lines of climate change.

Yet after the last few months of climate catastrophes, it’s clear that those lines now stand in front of every person on this planet.

It’s a tragedy that it takes death and destruction to get the global north to take notice that their current levels of ambition are woefully insufficient…with many of their climate pledges to developing nations — to each other — unmet.

Perhaps this is what it will take for all nations to finally wake up.

Perhaps this is what will finally stop the backsliding that has many nations actually — and maddingly so — re-embracing fossil fuels.

Perhaps this is what will finally get all nations to pay attention to what the science has been warning and warning us about for years.

Let’s put it another way — if we don’t act now — all nations, all people, in all sectors — the climate horror show we’re seeing now will be but a preview of what’s to come.

Just read what the IPCC says. They confirmed that global heating of 1.1°C has already caused dangerous and widespread losses and damages on people and nature. And that climate change impacts will only increase if we stick to the path we’re on.

…the path of pitifully low levels of adaptation …

…the path of woefully insufficient mitigation efforts as outlined in current national climate action plans — especially by G20 nations who account for 80 per cent of all emissions.

…the path of unfulfilled promises by developed nations to mobilize support to developing ones.

Yes, it’s about hearing your interests — you the most affected and least responsible for the climate crisis.

But it’s also about what you expect COP27 to concretely deliver with respect to implementation and in all of the four core work areas.

This forum is about you.

But in the spirit of openness, let me share with you some areas I feel progress is needed in the core four areas.

With respect to mitigation, in Glasgow all Parties — especially G20 nations — were instructed to revisit and strengthen their national climate action plans.

They agreed to submit those plans to the UNFCCC by September 26.

What did we receive? Twenty-three of nearly 200 Parties submitted their revised climate plans.

Twelve per cent. To call it a failing grade is an understatement.

Nations must fulfil their promises to each other — to the world — and deliver stronger climate plans…now. They still have time and I urge them to do so.

Adaptation is another area where we need to scale up implementation through National Adaptation Plans and the NDCs.

In Glasgow, Parties promised to double adaptation support to
$40 billion dollars a year by 2025.

To that end we require concrete proposals on how this will be delivered.

And we need an outcome on the Global Goal for Adaptation that captures and locks in progress made in 2022 while also providing direction to its work program in 2023.

Of course, we need progress with respect to finance in other areas as well.

Developed nations must — at long last — fulfill the $100 billion commitment to developing nations that was promised a decade ago.

On another front, national, business and finance leaders must show how they will transform the financial system and align financial flows with current and required climate change commitments.

In the same vein, we also need clarity on how to mobilize the necessary trillions of dollars of private finance — away from fossil fuels and towards renewable forms of clean energy.

Finally, we need a frank discussion and make substantive decisions about loss and damage. It’s an issue whose time has come.

Among other things, that means finalizing the operationalization of the Santiago network, including the full financing of it.

We also need to take concrete steps on how to address loss and damage finance beyond the Glasgow Dialogue.

It is an issue that cannot be deferred any longer.

As your invitation letter so aptly puts it: “Our very survival has never been so threatened.”

It’s time to turn things around.

We know where we are falling short. And we know how to correct the current course we are on.

If leaders in both the public and private sphere commit to

slashing emissions, building resilience, and fulfilling their commitments under the Paris Agreement, and…

…if they come to COP27 ready to achieve consensus on admittedly very complex and contentious issues – then I believe we will begin to see some real progress.

It’s a tall order I know.

But with your help, and with the good will and determination of all the parties, I believe we will prevail.