The Government of Bangladesh released the text of the following statement for the presidency of the Climate Vulnerable Forum: 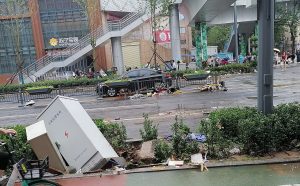 The Climate Vulnerable Forum Presidency of the Bangladesh Government would like to offer its sincere sympathy and support to the Government of the People’s Republic of China and the people of China for the recent floods the country is facing in the Henan province. As a country which itself regularly experiences the adverse effects of such floods, Bangladesh stands in heartfelt solidarity with all those affected by the devastating impacts of these extreme weather events, far more frequent and severe due to the global climate crisis unfolding across our planet.

The extreme flooding affecting particularly the Henan province of China is yet another painful reminder of
the pressing reality of climate change and its impact on people, communities, fundamental human rights, Mother Earth, and ecosystems worldwide. This and other, similar recent tragic climatic events underline the extent to which all countries are vulnerable. With the Climate Vulnerable Forum, Bangladesh is therefore strongly committed to collaboration, cooperation and collective action. We convey our solidarity and readiness to help China and its people, with Bangladesh ready to lend support such as by sharing its expertise on disaster risk management, and also by generally facilitating transnational knowledge-sharing on climate resilience. South-South and Triangular cooperation has become an increasingly important dimension of the struggle against climate disasters. There is a necessity for all nations to join forces and work with urgency and ambition for addressing this global crisis.