The Chair of the Climate Vulnerable Forum, HE Sheikh Hasina, Honorable Prime Minister of Bangladesh, released the following statement following the release of the 6th Assessment Report of the IPCC’s first working group: 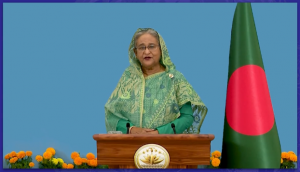 Statement in Response to Sixth Assessment Report of IPCC, 2021

The latest IPCC report has come as a clarion call for the entire world. Its indication of rising frequency and propensity of unpredictable and unprecedented changes, including sea­ level rise, glacial melt, and threats to island states, among others, are indeed pieces of evidence of accelerated climate impacts. For CVF nations, spending more than 25% of their annual expenses on adaptation efforts in response to the climate emergency, debt burdens are mounting.

On behalf of the 48 vulnerable countries, I would like to reiterate that it is unjust of the world to expect climate-vulnerable countries to pay such a heavy price for the emissions of others. Financing flows provided by the carbon debtor nations- those with the tremendous historical responsibility for causing this problem- are well below levels agreed in Copenhagen in 2009 and all subsequent COPs. The high emitters have not kept their side of the bargain, therefore, Climate-Vulnerable countries must change their position too. That is why on July the 8th of this year, I convened the first Climate Vulnerable Finance Summit, where CVF nations demanded a Delivery Plan for the UN-agreed US$500 billion of additional climate finance from developed countries for the five years 2020-2024. Given the default so far on this finance, such a plan is a bare minimum. These Climate-Vulnerable countries likewise expect COP26 to deliver a pact to ensure major emitting countries align their emission cuts with keeping temperatures below from surpassing 1,5°C.

Therefore, I would like to call out to re-assess CVF countries’ international debt burdens m response to the climate emergency and call international financial institutions, loan providers and donors to declare their consensus m supporting efforts towards restructuring internal loan repayment frameworks for these suffering countries. I have already asked the Chair of the V20 Group of Ministers of Finance, Bangladesh’s Minister of Finance H.E. Mr. Mustafa Kamal, as I will likewise consult with fellow CVF leaders, to invite and encourage them and the V20 to join in a collective effort of climate just debt restructuring and reach out to countries whose vulnerabilities mirror those of CVF member states, despite their economic positioning.

I must say, it is high time to come together, South helping the South, united in our common vulnerabilities and desire to see a world where we do more than survive. We shall thrive together in a world where our common humanity and shared passion for a better, safe, and prosperous world.

END_OF_DOCUMENT_TOKEN_TO_BE_REPLACED

CVF Chair Ghana intervention at the HoD cover decision meeting 17 November 2022 Thank you for giving me the floo...

END_OF_DOCUMENT_TOKEN_TO_BE_REPLACED

Statement by Hon. Dr. Henry Kokofu, Special Envoy of the CVF Presidency of Ghana on the G20 Bali Leaders’ Declaration

Statement by Hon. Dr. Henry Kokofu, Special Envoy of the CVF Presidency of Ghana on the G20 Bali Leaders' Declaration ...