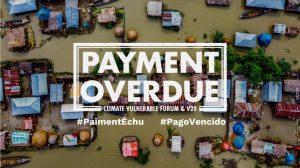 22 September 2022, ACCRA: The Climate Vulnerable Forum (CVF) & V20 have launched “Payment Overdue”, an online social media campaign to confront the global injustice of the growing fallout of the planetary climate emergency that affects the world’s vulnerable and least responsible populations most of all. The #PaymentOverdue campaign highlights the absence of any internationally agreed financial support for communities that suffer Loss & Damage (L&D) due to the climate crisis, invites individuals and groups to show support for this cause, promotes information and the sharing of L&D solutions, and aims to raise funds for communities worst affected.

Speaking at the launch of the campaign, the CVF Presidency Special Envoy and Executive Director of the Environmental Protection Agency (EPA) of Ghana, Hon. Henry Kokofu said:

“Payment is overdue for the loss and damage suffered by our most vulnerable and least responsible nations. We are first and foremost the victims of insufficient global action to keep warming below 1.5ºC, as enshrined in the Paris Agreement. Rich and responsible, polluting nations need to come forward with significant international support and finance and we expect the forthcoming UN Climate Change Conference in Sharm-al Sheikh, Egypt (COP27) to be a decisive moment when the global community acts on its responsibilities to protect those most exposed to this planetary crisis of the climate.” He added that “the most vulnerable nations are encouraging the public and any organization, group, or country to stand with us and to join in our ‘PaymentOverdue’ campaign. It’s time to settle the debt.”

Also commenting on the campaign launch, Dr. Saleemul Huq, Chair of the Expert Advisory Group of the CVF said:

“After decades of insufficient action from big, powerful, and wealthy nations whether on adaptation, mitigation, finance, capacity or technology, the unfortunate reality of today is that loss and damage have become the paramount issue for climate policy. Loss and damage
punishes above all the poor, the vulnerable, and those least responsible for – and least equipped to handle – the severe and mounting catastrophes brought about through the climate crisis” He added that ”I fully support this CVF and V20 campaign and I encourage you and your organizations to also get behind it and link up by encouraging individuals to sign their handraiser and to engage with it online including by using their digital toolkit.”

For more information on the campaign and on how to engage, visit: thecvf.org/paymentoverdue/

The CVF is an international forum for countries most threatened by climate change. Founded in 2009, it is composed of 55 members across five regions including Africa, Asia, the Caribbean, Latin America and the Pacific, and represents some 1.4 billion people worldwide. The Forum is led by a rotating chair for an ordinary period of two years, with Bangladesh currently chairing for the second time for the period 2020-2022. The Vulnerable Twenty (V20) Group of Ministers of Finance of the Climate Vulnerable Forum is a dedicated cooperation initiative of economies systemically vulnerable to climate change. It was created in an effort to strengthen economic and financial responses to climate change. For more, visit:
https://thecvf.org/about/
https://www.v-20.org/about