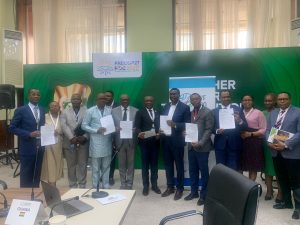 KINSHASA, 4 October, 2022: The now 58 countries that make up the Climate Vulnerable Forum (CVF) issued an urgent demand today for a dedicated international funding commitment and mechanisms for Loss and Damage, to help vulnerable countries recover from the steadily increasing number of devastating, climate-fuelled weather events.

In a communique agreed by the membership in Kinshasa, ahead of the upcoming United Nations climate conference in Sharm El Sheikh, the CVF called on “wealthy, capable and highly polluting” countries to commit to fund the Loss and Damage costs shouldered by the world’s most climate threatened nations.

Upon the adoption of the communique, the CVF Presidency Special Envoy of Ghana, which chairs the CVF, Hon. Henry Kokofu, said:

“We called for the big and polluting nations to align their Paris emission targets with 1.5 degrees Celsius. Yet, we are still waiting although the world is on fire and our nations find ourselves inside the oven of an overheating planet. We suffer more and more every day from the fallout of this failure and the failure of the international community to adequately support the climate adaptation agenda. Enough is enough. Payment is overdue, and we expect COP27 to act decisively.” He added that “those responsible should no longer be able to hide from the global injustice of the climate crisis. It’s time to begin settling the debt.”

A “Glasgow Dialogue” on funding arrangements for Loss and Damage was created at last year’s climate talks in Scotland but the CVF cautioned that this Dialogue must deliver funding for vulnerable countries, rather than descend into a “multi-year talk shop” that only serves as a vehicle to delay real action.

Meeting as the “Forum of Vulnerable Nations” on the sidelines of the UNFCCC pre-COP27 meeting in Kinshasa, Democratic Republic of Congo, the CVF also asked for COP27 to mandate an IPCC special report on loss and damage and for a global scheme to help financially protect vulnerable countries from climate disasters, specifically calling for the launch of a ‘Global Shield Against Climate Disaster and Risks’ to effectively protect the world’s most vulnerable nations.

The CVF also confirmed three new members at its Kinshasa meeting, Côte d’Ivoire, Chad and Kyrgyzstan, bringing the CVF’s membership from 55 to 58 members and making the CVF the largest bloc of countries active in the UN on climate change after the G77.

In its communique, the CVF stated that it is “gravely concerned” by the findings of the latest IPCC report, which estimates that the climate could heat by 1.5 degrees Celsius as early as 2030.

The devastating impact implied by global warming above 1.5 degrees Celsius has led the climate vulnerable countries, many of whom are struggling to cope with today’s warming of some 1.1 degrees, to term this a “survival limit.” The CVF called on all countries, particularly big emitters whose national climate targets are not in line with 1.5 degrees, to strengthen them this year as was agreed in Glasgow at COP26.

The CVF went on to call for greater transparency in the allocation of international climate adaptation funding for developing countries through a standalone Implementation Plan to ensure that agreements from rich nations at the Glasgow climate summit to double adaptation funding are fully delivered on.

It also called for the mobilization of at-scale regional adaptation financing programs such as the Africa Adaptation Acceleration Program, strengthening of the UNFCCC Adaptation Fund and increasing grant-based funding for adaptation to avoid worsening the debt situations of vulnerable nations.

CVF members speaking at the Forum of Vulnerable Nations in Kinshasa, moreover, highlighted a range of different measures to strengthen ambitious implementation of the Paris Agreement. One proposal from Vanuatu was a call for the adoption of a Resolution by the UN General Assembly requesting an Advisory Opinion from the International Court of Justice on the obligations of States, under international law, to protect the rights of present and future generations against the adverse effects of climate change.