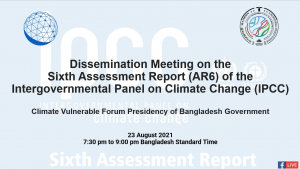 The Climate Vulnerable Forum (CVF) organized a Dissemination Meeting on the recently published ‘Sixth Assessment Report (AR6): by Working Group One of the Intergovernmental Panel on Climate Change (IPCC) on the 23rd of August, 2021 from 7:30-9 pm. Mr. Md. Mostafa Kamal, Honorable Secretary of the Ministry of Environment, Forests and Climate Change of Bangladesh Government graced the webinar as the Special Guest and Dr. Qazi Kholiquzzaman, Chairman of PKSF Bangladesh was the Chief Guest of the event. The Keynote speaker for the discussion was Dr A.K.M Saiful Islam, Professor, Institute of Water and Flood Management, Bangladesh University of Engineering and Technology (BUET) and AR6 IPCC Lead Author whose discussions were complemented by Dr. Michiel Schaeffer, Chief Scientist, Global Center on Adaptation, both of whom covered the key topics of Report which is sixth in a series of reports intended to assess scientific, technical, and socio-economic information concerning climate change. The speakers shared that as per the report, the atmosphere will warm by 1.5-degrees Celsius as early as the beginning of the next decade: the 2030s. Without drastic cuts, global warming is projected to increase well beyond such levels. Such findings have led for the report to be coined as a reality check or “Code Red for Humanity”. This national consultation for Bangladesh also included discussions on the implications for Bangladesh and the wider region, to help develop strategies for immediate actions, to be led by the CVF Presidency. Discussants in the meeting included eminent experts, policymakers, media spokespersons, representatives from the private sector and think tanks of Bangladesh. The discussants shared their concerns about the adverse impact of extreme climatic events on Bangladesh, a densely populated South Asian nation. Stating that policy makers must take into account the scale of impact along with the seasonality of natural disasters, they reiterated that the intensity and frequency of the disasters are expected to increase in the coming decades. A number of proposals were made to strengthen networks and tools for the dissemination and sharing of IPCC science in Bangladesh. Highlighting the reality that despite climate change being considered as a historical responsibility of the G20 countries, the discussants nevertheless shared that everyone will have to do mitigation one way or another. However, special efforts need to be made to ensure those most responsible – the G20 nations especially – above all take the necessary action. While any climate action by climate vulnerable countries including LDCs and SIDS needs to ensure that gains in GDP, food security and poverty reduction are kept well on track. A number of mitigation options in Bangladesh were also discussed, including the importance of reducing water usage – critical for adaptation – for reducing energy needs and emissions from agriculture. It was also stressed that adaptation will have to be ‘mitigation friendly’ while mitigation will have to be ‘adaptation friendly’. Stressing on the need to cut back on emissions more drastically, discussants also observed that mobilization and access to climate finance must be rallied as an vital agenda ahead of the  upcoming COP 26, to be held in Glasgow.