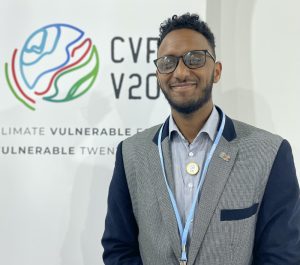 The days I spent preparing and packing for COP27 were among the most conflicting I’ve had in quite some time. Because after my very first experience at COP23 I had promised myself I would never go back – if I couldn’t accomplish something for my home country, Ethiopia.

COP23 in Germany was my first COP – and one of the most surprising and terrifying experiences in my environmental advocacy career. I say this not because of the exhaustion and confusion I faced managing my accommodation or conference rooms (though this had some effect) but because of the relentless discussions made on every tiny detail of wording and punctuation.

Returning from COP23, I felt discouraged and unsatisfied from my trip. But COP27 was a bit different…

This time, I was no longer a young advocate with a limited understanding about environmental issues. I was much more experienced, interested and focused. This meant I was better equipped to follow up on the issues which were much closer to my heart and to learn from everyone around me.

And in this COP I was able to see the various crises from different perspectives and to appreciate the need for representation for all stakeholders in the halls of the conference. I realized if I was there representing the youth of my country – among 45,000 people – I had to represent it well. I was clear and determined about the issues I wanted to focus on: Action on Climate Empowerment (ACE); Gender; and Capacity Development.

There was a huge double expectation for this COP: to be “the implementation COP” in parallel with being “the African COP”. This gave an interesting dynamic to negotiations and presentations in the pavilions.

But most people still believe the urgency of the climate crisis is usually not visible in these rooms, rather in the protests of young, indigenous, and vulnerable, non-state actors’ communities. The symbolic gesture of overwhelming high-level representatives from more than 100 countries, the CVF’s call to action, and UN Secretary General Antonio Guterres’ push for an actual Loss and Damage Fund, had a profound effect on the outcomes of COP27.

While the conference progressed in session, I saw the familiar face of uncertainty and confusion beginning to build and spread across the representatives of countries. The tension was hard to overlook in the second week of the conference, as statements of intent and outcomes became more imminent. The conference was stressful and some of the expected agreements were not panning out.

That is when the support I was receiving from the CVF Youth Fellowship and Wangari Matthai Foundation Youth Hub was most valuable. Help from individuals from the youth community and the experience sharing prepared by the organizations kept me focused.

Furthermore, all individuals coming from vulnerable countries like mine were ecstatic when the Fund for Loss and Damage, and the fight to keep 1.5 degrees alive were readdressed among the key outcomes.

Although we have seen great success in some elements of the negotiation process, there is still more work to be done on the major thematic areas of CMA and CMP.

Translating the outcomes of COP27 into national procedures will still be fraught with issues, due to widely differing requirements for different countries – while the $100 billion promised is yet to be realized.

But all in all, even with more work to be done, great things have come out of this COP. Organizations like CVF have played an important part and deserve all their recognition. I believe the cumulative efforts of the individuals and organizations have the potential to tackle the crisis itself.

Therefore, I encourage everyone willing to take on the battle against climate change to come and support with all your might and wit, to save our countries from burdens and help protect our human rights.