Uniquely Vulnerable to Climate Change, Madagascar Calls for Commitment and Action at COP27

Uniquely Vulnerable to Climate Change, Madagascar Calls for Commitment and Action at COP27 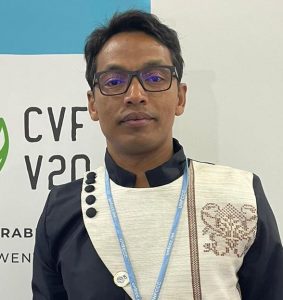 Located in the South-West basin of the Indian Ocean, Madagascar is home to some of the world’s most remarkable flora and fauna.

It is also facing the most remarkable challenge as a large island with four climatic zones – each of them bearing the scars of damage from the extremes of climate change.

Madagascar is a land of contrasts. The North and North-West are hot and humid. The East coast, from North-East to South-East is hot and even more humid. On the other hand, the West is dry and hot while the Highlands alternate between a cool dry season and a hot humid season. The South is semi-desert and arid.

These wildly varying regions mean Madagascar experiences wildly variable climatic conditions – from insufficient or irregular rainfall to category 4 and 5 cyclones; from droughts to floods. The net result is considerable damage to roads and transport links, rendering some of the worst affected areas inaccessible and causing loss of hydro-agricultural infrastructure and damage to agricultural crops.

During the annual cyclone season, two to three tropical cyclones hit the Big Island, resulting in flooding, coastal erosion and sea-level rise. In addition, due to the change in meteorological trajectory, other parts of Madagascar such as the West Coast have recently experienced the passage of uncommon cyclones. These intense tropical cyclones crossing the country bring gusty winds above 250 km/h.

Since 2008, cyclones and precipitation in the South-West Indian Ocean basin have intensified. In that year first Ivan and then Fame (both category 4) battered Madagascar with wind gusts exceeding 230km/h. During the 2021-2022 cyclone season, Batsiray (category 4) hit the East Coast with winds of 165 km/h and gusts of 235 km/h.

Cyclones are always associated with heavy rainfall which sometimes causes flooding. From the data provided by the General Directorate of Meteorology, the average annual rainfall is measured between 1000 to 1500mm in the Highlands. In future this could increase to 4000 mm in the Eastern region.

Even as Madagascar suffers extreme tropical storms, it is also experiencing longer and longer dry seasons and increasingly common dry spells. In particular, its Southern regions are victim to recurring drought which periodically spreads to the South East and Ihorombe regions.

Drought in Madagascar is, on the one hand, of meteorological origin – through the lack of rain –  and on the other, of hydrological origin, through insufficiency of water resources. As for the Southern Country, it suffers from high temperatures, low rainfall and strong winds. The situation is worst in the Androy Region, in the far South of the country, which suffered an intense heat wave during the passage of the El Niño phenomenon.

Addressing the scourge of climate change

To address these scourges, and in the context of implementing the Paris Agreement, Madagascar is in the process of finalizing its Nationally Determined Contributions update and its Long-Term Low-Greenhouse Gas Development Strategy national document.

Regarding Adaptation, Madagascar has already had its National Adaptation Plan with 12 targeted actions or projects/programmes fixed as a country priority.

Madagascar is now one of the most vulnerable countries to the negative impacts of climate change. Its vulnerability lies in its limited capacity for adaptation and the lack of means to strengthen its climate resilience.

Like any other developing country in difficulty, Madagascar advocates for adequate and predictable climate finance, the doubling of finance for adaptation, financing of action on loss and damage, climate technologies as well as the acceleration of the provision of resources for the implementation of Nationally Determined Contributions and the National Adaptation Plan.

A single voice to call for action at COP27

Following the intermediate meetings at COP27 (ministerial meetings in Copenhagen, the session of the subsidiary bodies in Bonn, as well as the Petersburg climate dialogue in Berlin), the countries are called upon to commit themselves to advance actions on the key issues – namely adaptation, loss and damage, mitigation – and above all to increase accessible climate finance for the success of COP27 under the United Nations Framework on Climate Change Convention (UNFCCC).

All developing countries that are victims of similar climatic situations should speak with one voice while defending their common interests in the face of the impacts of these scourges.

In this sense, discussions should focus on how to implement actions. Adaptation should be treated separately from loss and damage, and it is important to improve the understanding and distinction between these two themes. Loss and damage should be addressed under the United Nations Framework Climate Change Convention but not under the Paris Agreement.