A Mountainous Challenge for COP27

A Mountainous Challenge for COP27 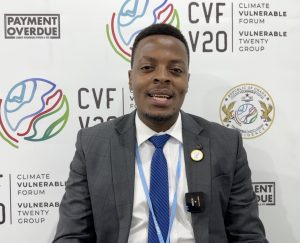 The highest peak in Africa rises in Tanzania. The beautiful Mount Kilimanjaro is a tourist hub, famous for its 5895m peak – and the striking snowcap which crowns it.

But the snowcap is vanishing at a dramatic pace. It’s predicted that by 2040 it may be gone – because of the unabated increase in global warming.

Tanzania is vulnerable to the impacts of climate change, partly because of geographical factors, and partly due to its low adaptive capacity to adjust and cope with existing and predicted outcomes driven by climate change.

More than 27% of Tanzania’s GDP comes from the agricultural sector. Climate change has caused extreme weather events including changes in precipitation patterns that have led to significant loss of livelihoods among farmers and livestock keepers. Water insecurity has led to instabilities in fishing patterns, loss of marine biodiversity – and the submergence of small islands. Zanzibar and Pemba are under threat from rising seas.

Nearly 50% of Tanzania’s arable land is degraded because of desertification and drought. Food insecurity is a threat to many developing countries including those in the Sub-Saharan region and Tanzania is no different.

Africa is the youngest continent, demographically, where more than 60% of the population is under 35 years old. As the climate changes, the decline in agricultural production means young people from rural areas are migrating to urban areas. In the cities, tension and the struggle to access scarce resources are becoming detrimental to the safety and welfare of the urban population. As a result, an escalation in robbery and other crimes has been reported.

Tanzania joins 57 other members of CVF this year to amplify demands to enhance climate resilience for the developing economies which contribute the least to climate change but are suffering the worst adverse effects.

The Tanzania National Climate Change Strategy (2021-2026) provides plans and expectations as a nation to mitigate and adapt to the impacts of climate change.

Climate finance remains a crucial concern that must be urgently resolved. At the country level, funds have been mobilized internally to respond to the impacts of climate change, but have fallen short of what is needed. In line with Article 2 and Article 4 of the Paris Agreement, more resources, funds, technology and capacity building are required to make the 1.5°C goal a reality.

Significant loss and damage is happening now, and as a country, we expect the Warsaw International Mechanism to be pushed into action. It has been said that COP27 is a COP for implementation. Tanzania expects that implementation to take the form of constant climate finance, robust technology, collaboration and climate justice.

COP27 must energize and prioritize these key actions in order to help more than 61 million people in Tanzania and 1.2 billion people across the CVF region.

At the turn of the century, under the Kyoto Protocol, feasible and concrete solutions to the climate change challenge were unveiled. In 2015 another noteworthy milestone was reached when the Paris Agreement was founded.

In simple language, plans are already laid out.

As a region we want executions. We have reached the point of now or never.

Africa is singing a “climate finance” song. The CVF is echoing it. Like our fellow CVF states, Tanzania’s priorities are the following for COP27:

As a famous proverb says: “When the last tree has been cut down, the last fish caught, the last river poisoned, only then will we realise that one cannot eat money.”