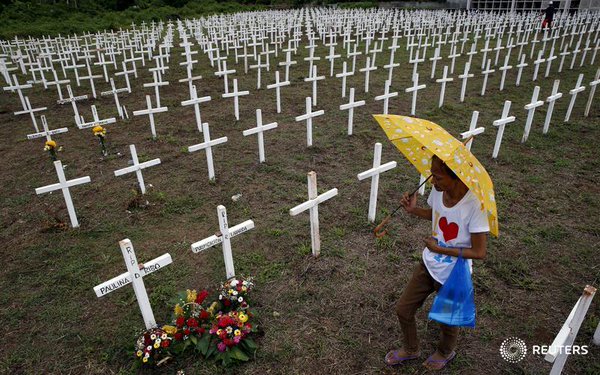 Leaders are gathering this week for the World Humanitarian Summit in Istanbul. The Summit presents a once-in-a-generation opportunity to take meaningful actions to better address current humanitarian needs and reduce them in the long term.

Over the past 20 years, a significant portion of those needs have stemmed from the impact of typhoons, floods, droughts, earthquakes and other natural hazards that have claimed 1.35 million lives and affected on average 218 million people per year, mostly in developing countries. Beyond the lives lost, the devastating impact of disasters on socio-economic development has surpassed $1.3 trillion since 2005. Add to this the impact of conflict and other crises, and the world faces unprecedented humanitarian needs, the likes of which we haven’t seen since the Second World War.

In this context, two things have a critical role in our ability to better handle the surge in humanitarian emergencies.

The first is whether governments, civil society and international institutions have the courage to heed what experience tells us and reform how we approach humanitarian crises.

Reform entails a fundamental shift from a seemingly constant state of reactivity to emergencies. Our actions must be designed to reduce and be better prepared for risks. Underlying factors that trigger the next disasters are often well recognized by countries and the international community. In most cases we know precisely how they can be addressed.

Simply put, we can no longer afford not to invest heavily in prevention and preparedness. Between 1991 and 2010, less than 0.5 per cent of the approximately 100 billion dollars of annual Official Development Assistance (ODA) has been spent on disaster risk reduction. Only a fraction of this has gone to preparedness. And yet, the potential and the consequences of failure are profound.

These sums compare to over $25 billion spent annually on disaster response and to the trillions of dollars of disaster losses. When every dollar spent on prevention and preparedness is known to save countless lives, not making that necessary investment is a violation of our collective responsibility.

The second and even more profound concern is the gathering climate emergency. 2015 broke records to become the hottest year on record and all signs point to 2016 being even hotter. Science now indicates that some 90 per cent of disasters are somehow climate-related. Last week, the World Meteorological Organisation showed we are perilously inching close to the 1.5 degrees limit beyond which the most catastrophic impacts are all but sealed.

That means more Yolandas, more Katrinas, and more Pams, year after year. On a less dramatic scale, it also means many more localized weather extremes that draw less attention but constantly wear down the resilience of vulnerable communities, disrupt development progress, and are an additional source of volatility.

The simple arithmetic of our response to climate change doesn’t add up either. Current emission commitments have us headed for several degrees of global warming with humanitarian implications that would be frightening to fathom.

To be clear, it is not just the many millions directly affected by drought, floods or storms that we need to protect – climate change is also a recognised driver of one of the biggest crises facing the world right now – displacement and migration. The influence of climate shocks on food production, prices and food security, as well as access to water, are also serious threats for stability and security in our world.

Climate impacts join the already toppling pile of highly complex stress factors faced by fragile states and vulnerable countries around the world. This recognition should set off alarm bells, spurring in all of us a call to do things better and differently.

That’s why the finance ministers of vulnerable countries led by the Philippines through the Vulnerable Twenty (V20) Group have agreed to form a new ‘Global Preparedness Partnership’ with the United Nations and the World Bank. The partnership ultimately seeks to make sure all vulnerable countries achieve a minimum level of readiness for future shocks. It should spur a fundamental shift in our response and place the emphasis on acting, not reacting. First on the to-do list will be to support 20 countries by 2020.

This effort has to go hand in hand with making the goals of the 2015 Paris Agreement on climate change a reality. That means triggering a transformation of economies to cap warming to not more than 1.5 degrees and meeting goals on resilience and financing to adapt to the changes already taking hold. Not doing so will render our best efforts to contain humanitarian emergencies increasingly futile. We’d also face all the security challenges and erosion of development gains that come with such a failure.

Meeting in Istanbul, the world’s leaders should be asked what they will do concretely to shift the course of humanitarian crises. They should ask what they can do to support people on the frontline – both those in communities and those sent to help them. They do not have to search around in the darkness for the answer. Building on our experience and the instruments at our disposal, let us act with greater urgency and truly shift to preventative efforts with the courage – and sense – to break from the past.

Helen Clark is administrator of the United Nations Development Programme and former Prime Minister of New Zealand; Cesar V. Purisima, is Secretary of Finance for the Philippines and chair of the Vulnerable 20 Group of Finance Ministers; and Stephen O’Brien is United Nations Under-Secretary-General for Humanitarian Affairs and Emergency Relief Coordinator.

Photo Caption: A woman visits the grave of a family member at a mass grave for Typhoon Haiyan victims on All Saints Day in Tacloban city in central Philippines November 1, 2015, and ahead of the second anniversary of the devastating typhoon that killed more than 6,000 people in central Philippines. Photo Credit: REUTERS/Erik De Castro