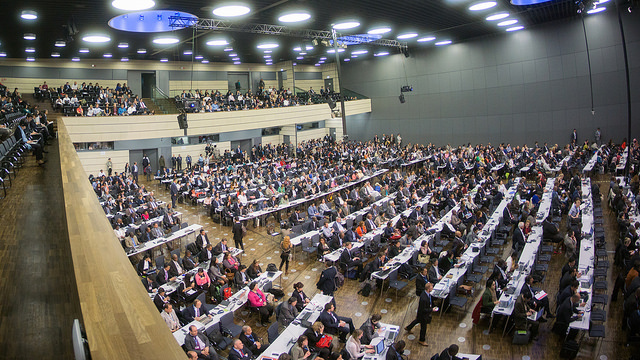 I am pleased to address you on behalf of the presidency of the Climate Vulnerable Forum. We are a group of nearly 50 nations representing more than one billion people most vulnerable to climate change across 5 continents.

The Paris Agreement is our lifeline. Important progress has been achieved in Bonn to advance the work programme for the Paris Agreement to keep the new international regime on track. This includes work under principles and provisions of the UNFCCC, the Kyoto Protocol and the Marrakech Partnership for Global Climate Action to maximize collaboration and cooperation to ensure the realization of existing pledges and commitments and to facilitate a greater number of, and more ambitious, commitments.

We are pleased that far-reaching support has emerged for the need for the 2018 Facilitative Dialogue to recommend action to keep on track with the goals of the Paris Agreement, notably the 1.5 degrees target. The world is moving ahead.

2018 needs to trigger enhanced ambition for climate action if the Paris Agreement’s goals are to remain achievable.

For the Climate Vulnerable Forum member countries, keeping to the 1.5 degrees goal is quite simply a matter of survival and so progress towards that goal remains paramount.

A number of our members face existential threats from rising seas if the 1.5C threshold is surpassed.

The 5th Assessment Report of the IPCC reached similar conclusions to the UNFCCC Structured Expert Dialogue which found that significant climate impacts are already occurring at the current level of global warming and additional magnitudes of warming will only increase the risk of severe, pervasive and irreversible impacts.

CVF commissioned research has shown, for instance, that 1.6 degrees is the best scientific estimate for when the Greenland ice sheet would enter irreversible long-term decline raising sea levels by several meters.

2 degrees of warming will also double the length of extreme heat waves in the tropical regions in just a few decades. That will drastically worsen drought, famine, health, security and migration pressures. Warming beyond 1.5 degrees will also appreciably increase the prevalence of extreme storms that have already been capable of large-scale loss of life and cutting a year’s GDP in half for some of our members.

In accordance with Article 9.4 of the Paris Agreement, we are of course calling for a rapid scaling up of predictable, adequate and sustainable financing that should be balanced and readily-accessible, together capacity and technological assistance from developed countries to address climate risks where our own means for addressing these is extremely restricted, recognizing also that our countries have contributed little to create such risks.

We also welcome the leadership shown by many countries including initiatives by a number of developing and developed countries in taking forward climate action and in supporting our developing countries.

Faced with grave risks, however, our members also see ambitious climate action as an opportunity to thrive. So there should be no backsliding on existing commitments while inaction is a serious threat to global cooperation.

We will continue to act. In Marrakech members of the CVF adopted a Vision that included a commitment to strive to achieve 100% renewable energy as fast as possible. We believe that climate action can reduce risks, clean the air, generate new green jobs, limit financial instability and enhance our sustainable use of domestic resources.

We believe in the intrinsic relationship between climate action and sustainable development which can help boost progress, create jobs and advance the achievement of the Sustainable Development Goals and the eradication of extreme poverty in accordance with the UNFCCC. In fact, a lack of ambitious climate action will very seriously undermine these globally agreed goals and priorities.

We are working now together with our Ministers of Finance to find innovative ways to accelerate our progress towards the 100% renewable energy vision, as well as to reduce risks and boost poverty reduction efforts. The V20 has also engaged in dialogue with the G20 identifying significant areas of common ground to push for urgent climate action and to find ways to support our ambitions to become reality.

As our countries and others prepare for enhanced ambition in the run-up to and following 2018, we will be promoting an unprecedented new global drive for accelerated climate action that we are certain would overwhelm any isolated effort to undermine UNFCCC, its subsequent protocol and the Paris Agreement.

In this year’s negotiations, the Forum is also advocating for:

1) A Paris Agreement global stocktake that brings together comprehensive inputs from, among other, parties, science, UN institutions and civil society, recognizing important linkages between climate change and human rights, in addition to social and economic factors;

3) Holding the NAP Expo to support vital exchange of knowledge and best practice to help vulnerable countries to address the urgent challenges of climate impacts on the frontline;

4) Full support to the rolling workplan and ExComm members of the Warsaw International Mechanism on Loss and Damage in the context of recurrent and increasingly serious consequences from planetary warming;

5) Rapid dispersal of the Green Climate Fund’s current capital to meet the urgency of climate action in support of particularly vulnerable developing country Parties, such as the least developed countries and small island developing States, as stated in the Paris agreement (Article 9.4 of Paris Agreement). The scaling-up of finance towards the US $100 billion 2020 target. We are also calling for support for formulating and implementing National Adaptation Plans and for streamlining and expediting the process of accrediting national implementing entities towards enhanced direct access.

6) Means of Implementation is absolutely essential for developing countries, which also includes technology transfer and capacity building to ensure the proper implementation of climate action plans and the achievement of the objective of the Convention.

This year’s COP23 is a both the incoming and outgoing presidencies of Fiji and Morocco members of the Climate Vulnerable Forum. We express the full support of the Forum behind Fiji and Morocco for continued progress and the best possible outcome to the negotiations this year.

Thank you very much.