San José, Costa Rica, Thursday 12 September 2013 – Costa Rica has announced that the Climate Vulnerable Forum meeting scheduled to be held at Turrialba, Costa Rica, on 19th and 20th of September next has been postponed to 2014 to provide an opportunity for more countries to become involved.

Interest in the meeting among developing countries and the region was high and the Ministry of Foreign Affairs wishes to ensure possibilities for all interested countries to be represented at the highest political and technical level at this important event.

While Costa Rica had committed to host the high-level CVF meeting in 2013, it was agreed that giving consideration to the postponement of the event would enable a more representative and stronger meeting to take place next year. The new dates in 2014 are to be communicated in due course.

A 2014 CVF will additionally enable the meeting to contribute more directly towards the next major United Nations Climate Change Conference being hosted by Peru at the end of 2014. The summit in Peru will be the last full-scale international climate change meeting ahead of the 2015 deadline set by the 193 parties to the UN Convention for a new global climate change agreement set to culminate that year in Paris.

Having assumed the presidency of the CVF from Bangladesh, Costa Rica and other countries involved in the initiative are meanwhile proceeding with other activities of the Forum, notably in the domain of climate change finance together with the cooperation of partners, including the World Bank Group, the International Monetary Fund and the United Nations Development Programme.

The Ministry is also delighted to announce the launch of the new website (currently in English only) of the Forum where background information and updates on Costa Rica’s presidency of this initiative will be made available, see: www.thecvf.org

END_OF_DOCUMENT_TOKEN_TO_BE_REPLACED 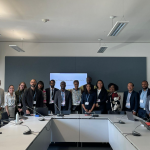