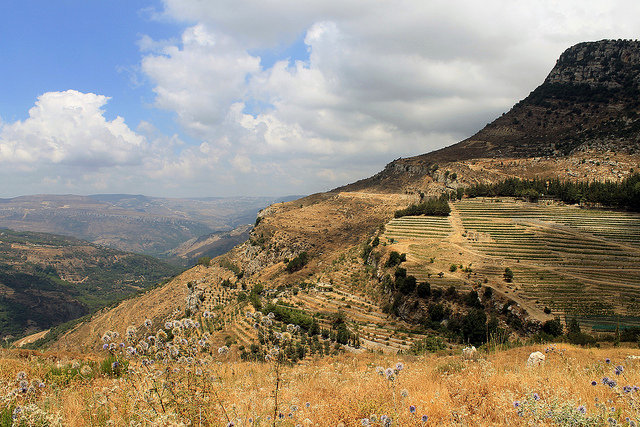 Lebanon is at the forefront of one of the world’s most conflicted regions, bordered by Syria’s Civil War, Israeli-Palestinian tensions, and now by the coalition war on ISIS.

Since the onset of Syrian hostilities in 2011, in particular, more than one million refugees have fled to Lebanon, a country of 4 million. Squeezing into a territory the equivalent of the island of Puerto Rico, the UN Refugee Agency has projected the influx could reach 1.5 million by year’s end.

Lebanon and Lebanese communities of all religious persuasions have demonstrated extraordinary generosity in responding to the tremendous burden of this influx.

The additional population does however place extreme demands on local resources and public services, water especially.

Inconvenient then that this past year Lebanon saw perhaps the worst drought in living memory in a harsh blow to regional water availability.

According to the World Meteorological Organization the 2014 summer is the hottest ever recorded globally. Lebanon’s last winter – and wet season – saw only half the amount of rain normally expected, and virtually no snow.

With nothing to replenish the water table, we’re being run out of water just when it’s needed most.

Last month a major environmental assessment showed that in the spring groundwater levels in key regions had already plummeted by half, with streams, dams and reservoirs around the country also severely depleted.

When I served here in the late 1990s such a water shortage was unthinkable. Sorting out adequate water supplies will cost a whopping 1.3 billion US dollars, it is estimated.

Water, of course, is a life necessity. When it’s scarce, and typically also expensive, socioeconomic pressures mount: a limit is put on crop growing, industries heavily reliant on water see profits crushed, and the health and well-being of vulnerable groups often take a nosedive.

Such stresses increase hardships especially for refugees, now a key demographic of Lebanon, and the Lebanese communities that host them.

Indeed while refugees are located across the country, the bulk are now situated in some 242 communities whose Lebanese residents were already living below the poverty line prior to the Syrian War. Competition between locals and refugees for jobs and public services inevitably give rise to social tensions.

Moreover, recent attacks on Arsal, a Lebanese town bordering Syria, by ISIS and al-Qaida affiliate the al-Nusra Front, one of the largest jihadist groups active in the Syrian War, have raised additional public concerns about the presence of large numbers of refugees.

Despite the best efforts of the government and international community, the existence of a great many adolescents and others that are unable to attend school or find employment does constitute an important potential recruiting pool for extremist groups.

As ISIS and al-Nusra become increasingly active on the eastern border, the stability of Lebanon faces mounting risks.

Simply put, it is already a herculean task to meet the needs of a massive refugee population, and the generally impoverished host communities, while ensuring the stability of a country threatened by growing regional crises.

Certainly, we could do without the additional pressures of an unprecedented drought.

But history and science are not on our side. NASA scientists thinking is that events like this region’s drought, or say the 2003 French summer or 2010 Moscow heatwave, are so statistically unusual that they almost certainly would not have occurred in the absence of global warming.

The UN’s Intergovernmental Panel on Climate Change has also repeatedly articulated the likelihood of a continued drying of the Mediterranean region as the planet heats up. And if we are to believe mainstream science, the warming has only just begun.

The immediate Middle East region has been in sustained drought since at least 2006. The current drought and its knock-on effects are by no means limited to Lebanon’s national borders: drought in Syria affects food production, while Gaza and other hotspots in the region have also felt similar pressures.

In fact, this whole zone may already be experiencing the early stages of a “mega-drought”, the possible humanitarian, social, economic and stability implications of which should seriously concern aid agencies and security analysts from Washington DC to Brussels, Beirut or Erbil.

Climate change is not responsible for the crisis in Syria, nor the cause of the region’s refugee flows, among others. Neither, by any means is it the most serious challenge we face in our daily work.

The consequences of a worsening climate could however become a major feature in efforts to maintain regional security going forward.

In this context it is worth recalling a study of last year that highlighted the link between geographically disparate climate-triggered crop failures and the destabilizing spikes in food prices across the Middle East which coincided neatly with the Arab Spring of 2010-11.

Clearly, climate change shocks involve interactions of local and global factors. Largely out of our hands, effects may also be potentially very inconveniently timed. Defense analysts are growing increasingly concerned about these connections for good reason.

While we hope for a return of the rains this winter, it’s already clear that changes in the climate are an important and unhelpful factor for the efforts of the government and the UN here, and for the stability of a region central to global security interests more generally.

As governments weigh the implications of tackling the root causes of climate change, they should also be fully accounting for the potentially far-reaching extent of its security implications.

Ross Mountain is the United Nations system coordinator in Lebanon